The tumor  microenvironment (TME) is comprised of the tumor, extracellular matrix (ECM)  and various non-transformed cells including fibroblasts, immune infiltrates,  and vascular vessels recruited from nearby local or distant tissues. TME plays  a key role in tumor initiation, progression, invasion, metastasis, and resistance  by deploying matrices, cytokines, growth factors, as well as vascular networks  for nutrient and waste exchange (1). Understanding TME requires a close  examination of signaling pathways responsible for its characteristics. 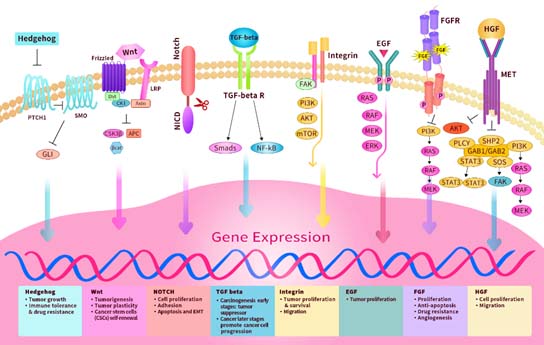 Click to find out more about classic TME signaling pathways

The Hedgehog, Notch and Wnt etc. are groups of  evolutionarily highly conserved signaling pathways that determine cellular  fate. These pathways are found to be upregulated in TME including cancer stem  cells (1) and serve as important targets in cancer therapies(2).

The canonical Hedgehog (HH) pathway involves autocatalysis of HHC,  addition of cholesterol molecule to the N-terminus and secretion of HHN ligand.  The binding of HHN to its cognate receptor Patched (PTCH1) releases its  inhibitory effect on Smoothened (SMO) resulting in the downstream release of  GLI transcription factors. The HH pathway plays a critical role in embryonic  development and adult tissue maintenance and regeneration. Hyperactive HH  signaling, either mutation in PTCH, SMO or overexpressing of HH, is responsible  for basal cell carcinoma, pancreatic, lung, prostate, ovarian and breast  cancer. In TME, upregulated HH signaling in tumor cells promotes the growth and  survival of neighboring tumor cells via autocrine signaling. While HH ligand  produced by epithelial cells can signal mesenchymal/stromal cells which signal  back to epithelial cells promoting proliferation and survival in a paracrine  signaling manner(2).

The Notch signaling pathway is a juxtacrine  (contact-dependent) signaling pathway that mediates cell fate decisions between  neighboring cells and is involved in every component of the TME as well as in  the interaction between different parts of the TME(3). The Notch receptor is a transcription factor anchored at the membrane and  is released following interaction with a cognate ligand. Binding of the Notch  ligand leads to the unfolding of the Notch regulatory region (NRR) and unmasking  of the cleavage sites for ADAM10/17 and the γ-secretase. Upon cleavage  at NPR, the Notch intracellular domain (NICD) is released into the cytosol. The  dynamic and strength of NICD production depend on the Notch ligands. These ligands  are transmembrane proteins of the Delta/Serrate/LAG-2 (DSL) family. In mammals,  this family includes three delta-like ligands (Dll1, Dll3, and Dll4) and two  jagged ligands (Jag1 and Jag2) (3).

Notch receptors and ligands are widely expressed in the  various compartments of the TME. Researchers have identified that Notch  signaling is involved in angiogenesis, activation of fibroblasts, maintenance of the cancer stem cell niche,shape  the immune infiltrate at the tumor site  and may also be regulated by physical and chemical heterogeneity in the  TME (3).

In the canonical Wnt pathway, the Wnt  ligand binds to the Frizzled (FZD) receptor, which is a G protein-coupled  receptor (GPCR) with seven transmembrane domains and the co-receptor low  density lipoprotein receptor-related protein 5/6(LRP5/6). Consequently,  β-catenin accumulates and translocates to the nucleus where it can bind  to the transcription factor T-cell factor/lymphoid enhancer factor (TCF/LEF)  and recruit the transcriptional Kat3 co-activator p300 and/or CREB-binding  protein (CBP) to activate downstream Wnt target genes. The genes activated by  Wnt have important functions for many processes in oncogenesis and development,  such as self-renewal, differentiation, proliferation, and metastasis. Whereas  Non-canonical Wnt signaling contributes to the stabilization of proteins other  than β-catenin to maintain intracellular functions through these alternative  pathways (4).

Transforming growth factor beta (TGF-β) is a pleiotropic growth factor. The TGF-β  signaling is a conserved pathway that emerged with multicellular organisms and plays  a key role in many developmental and cellular processes: TGF-β binds to a single TβRII receptor which  brings together two TβRI and two TβRII receptors into a hetero-tetrameric complex. This ligand-mediated  assembly triggers the phosphorylation and activation of TβRI by TβRII initiating downstream signaling  pathways through their intracellular serine/threonine kinase domains. The  signal is transduced through either canonical (SMAD-dependent) or non-canonical  (SMAD-independent) signaling pathways (5, 6).

TGF-β signaling pathway is one of the most  important signaling pathways in TME, which plays dual roles in carcinogenesis.  In early phases, TGF-β functions as a tumor suppressor that blocks tumor growth  by inhibiting cell cycle progression in cancer cells and stimulating apoptosis  in pre-malignant cells. However, tumor-suppressive effects of TGF-β are often lost in advanced tumors as its tumor pro-invasive  functions prevail. The subsequently increased secretion of TGFβ in the tumor microenvironment affects cancer cell growth and  stimulates migration, invasion, and angiogenesis, In addition, it is suggested that TGF-β might take a key role in shaping the CAF  landscape, especially in light of its connection to myofibroblast  differentiation and function in tumors and in other fibrotic diseases(5-7).

Activation of latent TGF-β signaling begins first with cleavage of  its proprotein into the latency-associated peptide (LAP) and the mature TGF-β.  The LAP dimer then binds to mature TGF-β forming small latent complex (SLC). There  are three major mechanisms for activation of this latent TGF-β.

a) Proteases in the extracellular matrix (ECM) cleavage of LAP and  release of active TGF-β. Alternatively, thrombospondin (TSP) can also induce  activation of TGF-β by direct binding to LAP.

b) The SLC can be anchored to the ECM proteins via latent TGF-β-binding  protein (LTBP) and forms the so-called large latent complex (LLC) which will  release active TGF-β by cell contraction after interaction between LAP and integrins.

Integrins belong to the family of cell  adhesion receptors that control cell adhesion to ECM and were comprise of α and  β heterodimeric subunits with 24 distinct heterodimers identified to date. Integrins  also plays a key role in cell signaling regulating cell proliferation, survival,  migration, and invasion. Additionally, Integrin signaling is linked with other  receptor tyrosine kinase (RTK) signaling as well as a mediator of downstream  signal transduction including PI3-Akt, MAPK/Erk, SAPKs and JNK pathways. In  TME, Integrin supports tumor cell adhesion to ECM, angiogenesis and plays a  major role in cancer cell metastasis and aggressiveness. Therefore, Integrins  are being targeted for anticancer therapy by integrin blockers. Two candidates,  an Arg-Gly-Asp (RGD) pentapeptide targeting avb3 and avb5 integrins and  volociximab, IgG4 inhibitor of a5b1 are in phase II and III clinical trials(8).

Endothelial growth factor receptor (EGFR)  is expressed in almost all non-neoplastic cell types, except in the mature  cells of the lymph hemopoietic system. Notably, active EGFR signaling in the  non-neoplastic cells of the TME is speculated to take a supportive role in  tumor cell proliferation, angiogenesis and metastasis. Activation of EGFR is  triggered by ligand binding and receptor dimerization followed by cross  phosphorylation occurring via Src homology 2 (SH2) and phosphotyrosine binding  (PTB) domains. The downstream signaling pathway activated by EGFR is the  KRAS-BRAF-MEK-ERK pathway, PI3K pathway as well as AKT and STAT pathways among  others.

Fibroblast growth factor receptors (FGFRs)  are RTKs involved in several biological processes including regulation of  tissue development and repair. Alterations in FGFRs 1–4, such as amplification,  fusions and mutations, as well as aberrant epigenetic or transcriptional  regulation and changes in tumor-stromal interactions in the tumor  microenvironment, can lead to the development and/or progression of cancer (10).

During carcinogenesis, FGF triggers the autophosphorylation of FGFR  at a key tyrosine residue in an activation loop of the tyrosine kinase domain.  FGFR autophosphorylation results in a structural change of the tyrosine kinase  domain from an inactive form to an active form. Subsequently, FGF signals are  transduced to the RAS-MAPK, and PI3K-AKT signaling branches via FGFRs and FRS2.  FGF signals are also transduced to the DAG-PKC, and IP3-Ca2+-releasing  signaling branches via FGFRs and cell growth factor PLCγ. FGF signals are involved in stemness, proliferation,  anti-apoptosis, drug resistance, angiogenesis, epithelial-to-mesenchymal  transition (EMT), and invasion in target cells(11).

Hepatocyte growth factor (HGF), also  known as scatter factor, is generally secreted by stromal cells and is the  native peptide ligand of HGFR/c-MET receptor. The aberrant activation of HGFR/cMET  plays important role in the development and progression of several human  cancers including lung, renal, gastrointestinal, thyroid and breast carcinomas,  as well as sarcomas and malignancies of the nervous system such as glioblastoma  multiforme (GBM) among others.

The TME is a complex environment of variety of signaling molecules,  chemokine, soluble factors and ECM that supports growth, survival and invasion  of tumor cells(2). This environment is fostered by stromal cells which surrounds the  tumor composed of epithelial cell promoting tumor angiogenesis, fibroblast  releasing chemokines, immune cells and inflammatory cells. This network between  the stroma and tumor cell is critical and understanding and targeting these  signaling pathways will enable development of effective cancer therapeutics  against solid tumors with historically poor prognosis.