Antibody-drug conjugates (ADCs) are a new class of novel, highly targeted anti-cancer therapeutics. By grafting monoclonal antibodies to a cytotoxic payload, this vectorized chemotherapy is highly potent and have shown immense potential in combating many cancers. However, various factors during development can affect the efficacy of ADCs, including the selected target protein, monoclonal antibody quality, payload, linker stability, and most of all, the conjugation method. Commonly performed conjugation methods utilize random conjugation which often leads to poor stability and variability in efficacy. A site-specific conjugation method precisely controls the conjugation site, producing a homogenous mixture, which is an especially promising path to improving ADC design. In this study, we utilize our AGLink site-specific conjugation kit to perform site-specific enzymatic modification of IgG Fc glycans and evaluate ADC conjugation homogeneity and cytotoxicity.

Antibody–drug conjugates (ADC) typically consist of a monoclonal antibody (mAbs) attached to a cytotoxic payload via a chemical linker. ADC development requires careful consideration of each of its key components and development strategy since each element has the potential to affect the final therapeutic efficacy and safety.1

Figure 1. The structure, components and functions and characteristic of an ADC drug. 1

One important characteristic of an ADC drug is the drug-to-antibody ratio (DAR). This ratio elucidates the number of drug molecules bound onto a single antibody. Based on the conjugation strategy, the number of drug molecules that are bound to a single antibody varies. Low-drug loading reduces the overall potency, whereas high-drug loading can have higher cytotoxic effects but increased side-effects and altered pharmacokinetics (PK). As such, appropriate selection of conjugation strategy can affect the homogeneity of ADCs and resulting effectiveness.2-3

Conventional conjugation techniques perform non-specific conjugation on pre-existing lysine or cysteine residues via appropriate coupling reactions. This results in a high variability of DAR, from 0 to 8, as well as various linker positions, producing a set of heterogenous ADCs.1-3

To increase the efficacy of ADCs, site-specific conjugation technologies, including engineered cysteine residues, unnatural amino acids, or enzymatic conjugation through glycosyltransferases, have been applied to obtain more homogeneous ADCs. 3 This has proven to be clinically effective by improving ADC pharmacokinetics and therapeutic index. Furthermore, the increased control over conjugation site reduces the overall the hydrophobicity of the linker–payload, preventing unintended payload release in blood.3

AGLink ADC site-specific conjugation kits (ACROBiosystems, Glyco-therapy Biotechnology; Cat. No. ADC-P001 ; Cat. No. ADC-P002 ) were used and based on the conjugation platform YTConjuTM (Glyco-therapy Biotechnology Co.,Ltd.).4 (Add more details such as source of MMAE, antibody or mention what is included in the kit). Add the solvent sources, cell lines, etc. 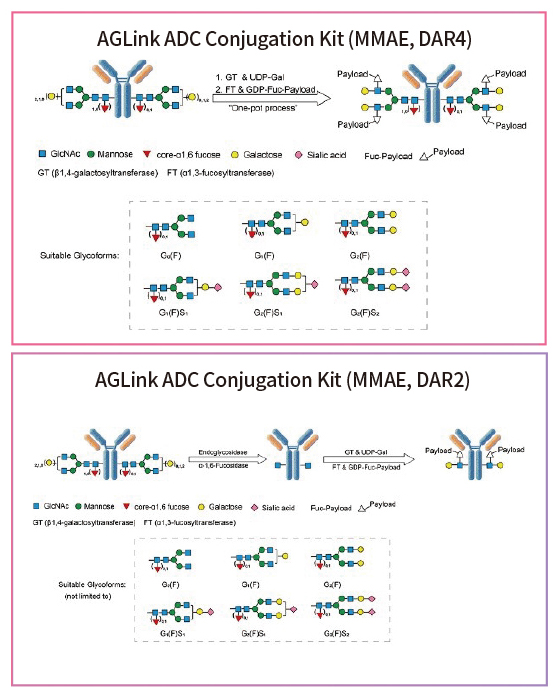 Figure 2. Conjugation mechanisms using the AGLink ADC Conjugation Kit. Two different conjugation methods are proposed above with either a DAR of 2 or 4. Suitable glycoforms that are compatible for enzymatic modification are listed below.

To characterize the efficacy of AGLink, Trastuzumab and MMAE were used. N-glycans were identified to be at the asparagine 297 (N297) position of the CH2 domain on each heavy chain Fc fragment. The N-glycans were reduced to form reactive sites linked with payloads through glycosylation.1 The resulting glycosylation is predominantly composed of varied amounts of N-acetylglucosamine, fucose, galactose, mannose and N-acetylneuraminic acid (sialic acid) residues, which are assembled in different complex-type biantennary structures.4 The resulting ADCs (Trastuzumab-MMAE) with different DARs (2 or 4) were developed and characterized through varying studies. 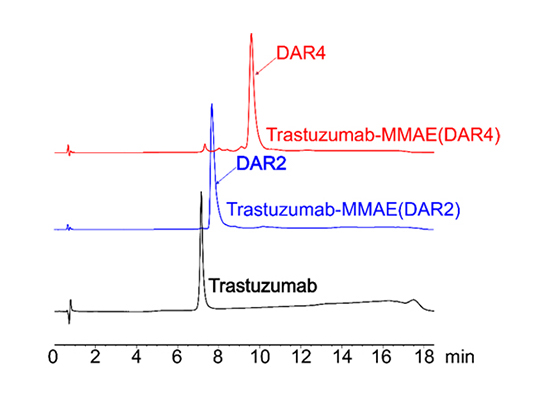 Figure 3. HIC-HPLC analysis of MMAE ADCs (DAR 4 & DAR 2). A shift in retention time was observed for higher DAR ADCs result associated with to the hydrophobic payload (MMAE). After conjugation using AGLink ADC kit, it can be observed that the resulting ADCs are highly homogenous for both DAR2 and DAR4 conjugation mechanisms. 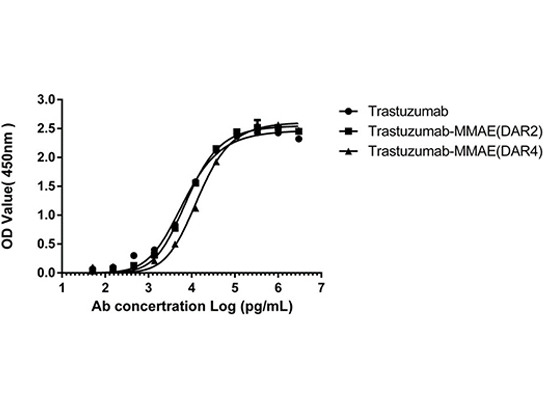 Figure 4. ELISA analysis was performed to test the antigen-binding capacity of both DAR2 and DAR4 ADCs. HER2 antigen binding to Trastuzumab-MMAE (DAR2/4) was unaffected after the AGLink conjugation, preserving antibody bioactivity. 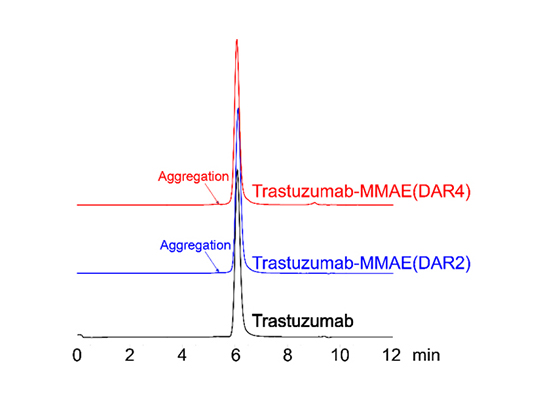 Figure 5. SEC-HPLC was performed to evaluate ADC aggregation. No observable peaks were seen in the resulting chromatogram, with less than 5% of antibody aggregation.

Figure 6. MMAE ADCs (DAR2/4) were spiked into human plasma and tested over 8 days and evaluated through LC-MS. Both types of ADCs were stable in vitro throughout the experiment. 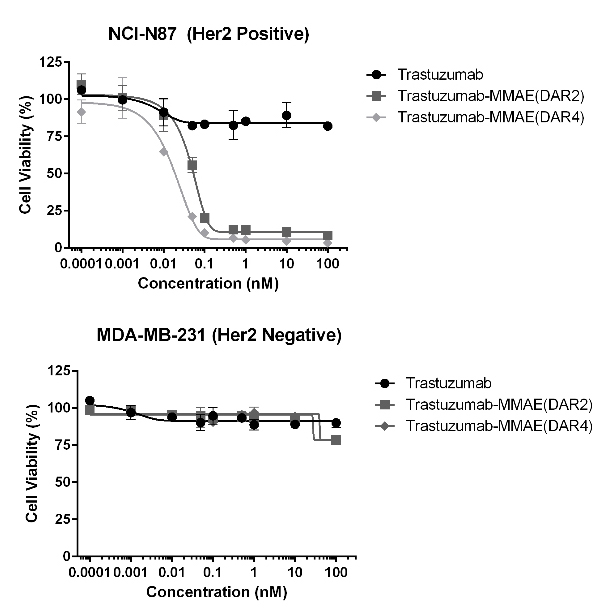