In 1973, Interleukin 6 (IL-6) was identified as a soluble factor secreted by T cells, which is essential for the production of antibodies by B cells. Since its discovery nearly 50 years ago, the IL-6 signaling pathway has emerged as a key pathway involved in immune regulation in health and immune dysregulation in many diseases.

In the classical pathway, IL-6 binds to both transmembrane and soluble forms of its receptor IL-6 R，namely mIL-6R and sIL-6R. After that, the complex binds to the Glycoprotein 130（gp130） and downstream signaling and gene expression are triggered. In the trans- signaling pathway, the complex of sIL-6 with the receptor binds to gp130, and intracellular signal transduction is initiated. In the next step, the JAK-STAT, RAS-RAF, and other pathways are activated, promoting cellular proliferation, differentiation, oxidative stress, and immune regulation. The classical IL-6 signal is limited to the cells (macrophages, neutrophils, T cells, etc.) that express IL-6R. But when IL-6 levels are elevated, the signal is widely expressed due to the ubiquitous nature of gp130. 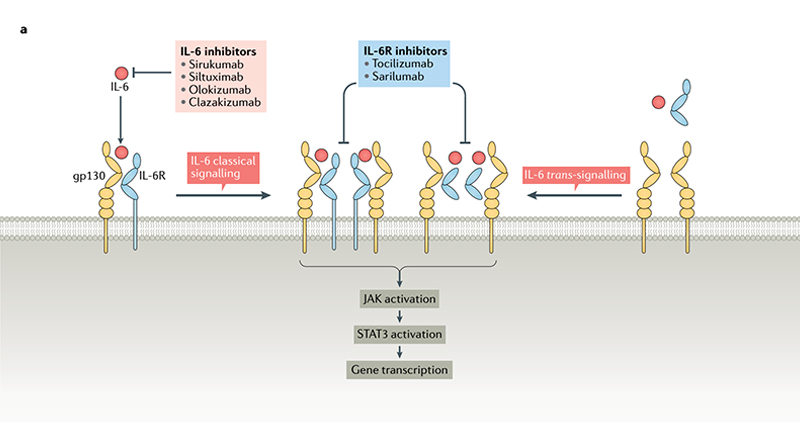 Furthermore, emerging evidence suggests that dysregulation of IL-6 contributes to a variety of disease states, including various types of cancer development, progression, and metastasis, increased levels of IL-6 are associated with a higher risk of cancer and other diseases, such as insulin resistance, asthma, coronary heart disease, advanced cancer, and can also serve as a prognostic marker for cancer. Targeting this pathway may expand to the treatment of several other symptoms, such as uveitis, neuromyelitis optica, and more recently, COVID-19 pneumonia.

ACROBiosystems has developed a series of high-quality IL-6 and IL-6 receptor proteins to facilitate the development of IL-6 related drugs.

Human and Mouse species are available

High purity is more than 95% as verified by SDS-PAGE 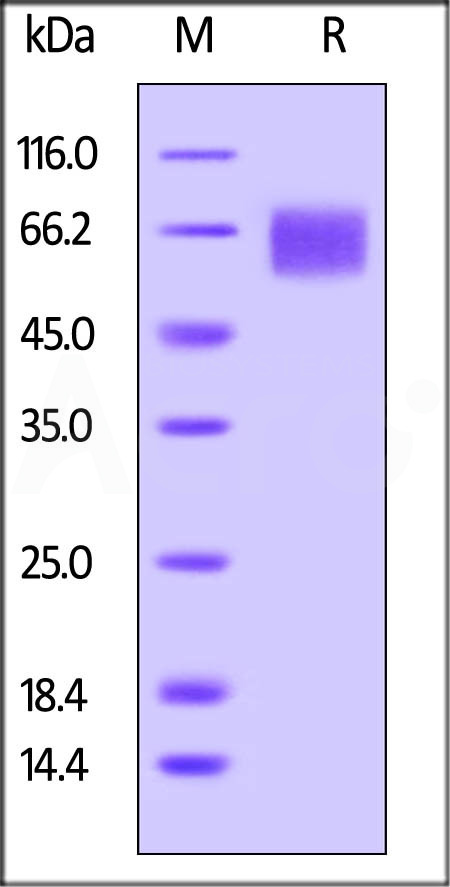 Biotinylated Human IL-6 R alpha, Avitag, His Tag (Cat. No. CD6-H82E8) on SDS-PAGE under reducing (R) condition. The gel was stained overnight with Coomassie Blue. The purity of the protein is greater than 95%. The protein has a calculated MW of 41.7 kDa and migrates as 55-70 kDa due to glycosylation. 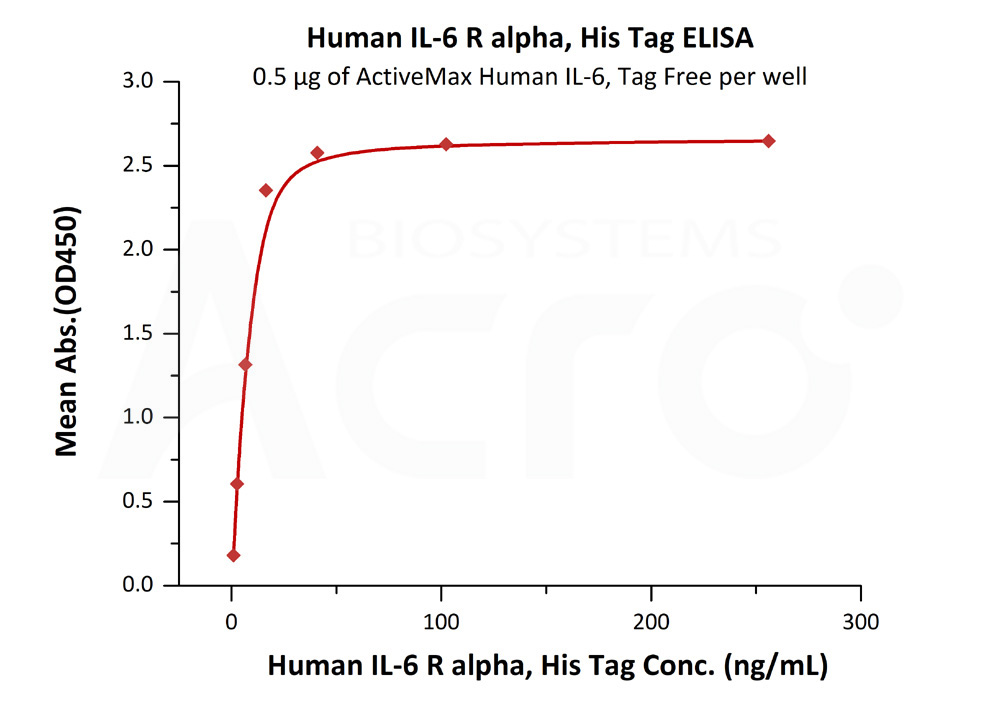 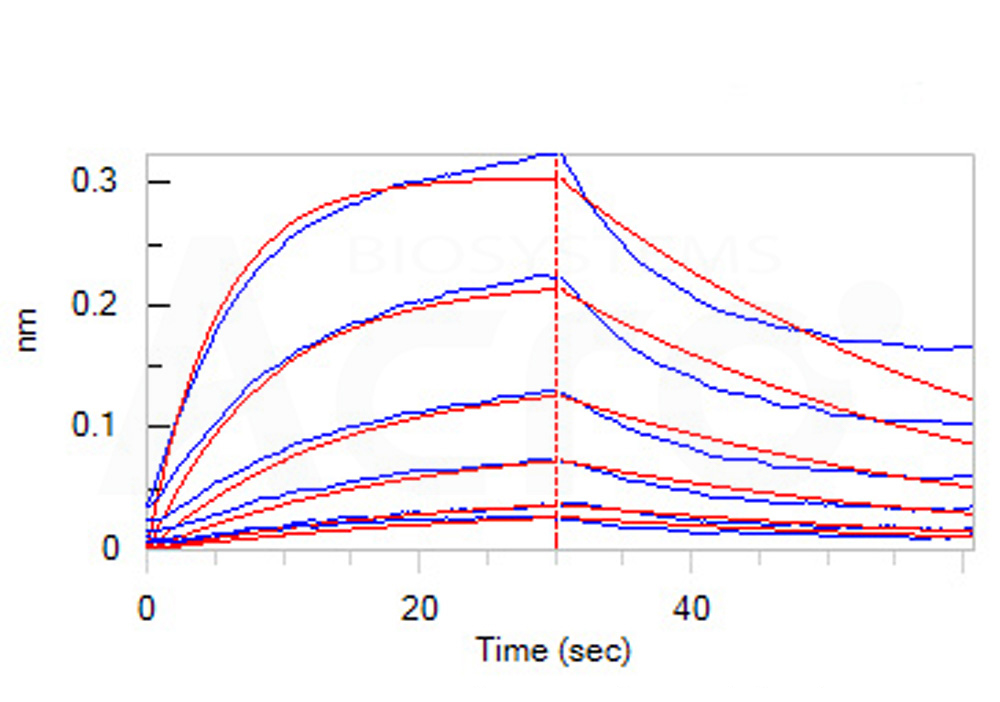 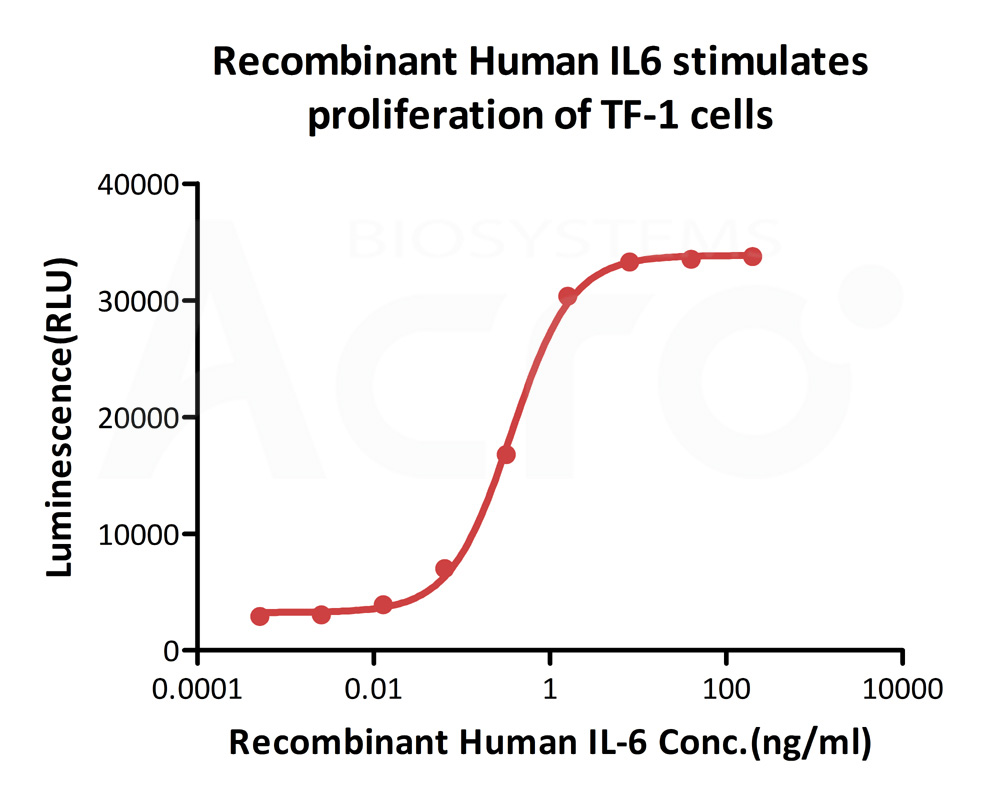