An idiotope is the unique set of antigenic determinants (epitopes) of the variable portion of an antibody. An anti-idiotypic (Anti-ID) antibody binds to the idiotope of another antibody, usually an antibody drug, which makes it a very powerful tool for antibody drug development, especially for immunogenicity and PK/PD analysis.

To support preclinical/clinical immunogenicity and PK analysis, ACROBiosystems has developed a series of high-affinity anti-idiotypic antibodies. Our pipeline covers five hot targets including adalim*mab, Ritux*mab, Cetux*mab, Trastuz*mab, and Bevaciz*mab. To help the drug development process, we provide assay protocols which can be applied to different application scenarios.

Therapeutic proteins such as monoclonal antibodies are currently essential in the treatment of cancer, autoimmune disease, and other diseases. Since protein has its intrinsic feature of immunogenicity owing to its structure containing potential B-cell and T-cell epitopes, therapeutic proteins have the potential to induce Anti-Drug Antibodies(ADA) even if the protein has the same amino acid sequence as endogenous human proteins. The emergence of ADA in patients can potentially lead to loss of efficacy and/or adverse events. Therefore, immunogenicity risk assessment and risk-mitigating strategies are required during the development of therapeutic protein products.

Developing a mono/multi-clonal antibody in-house as a positive control for ADA assay is extremely time-consuming. To solve this problem, ACROBiosystems developed a series of anti-drug antibody standards for ADA assays. 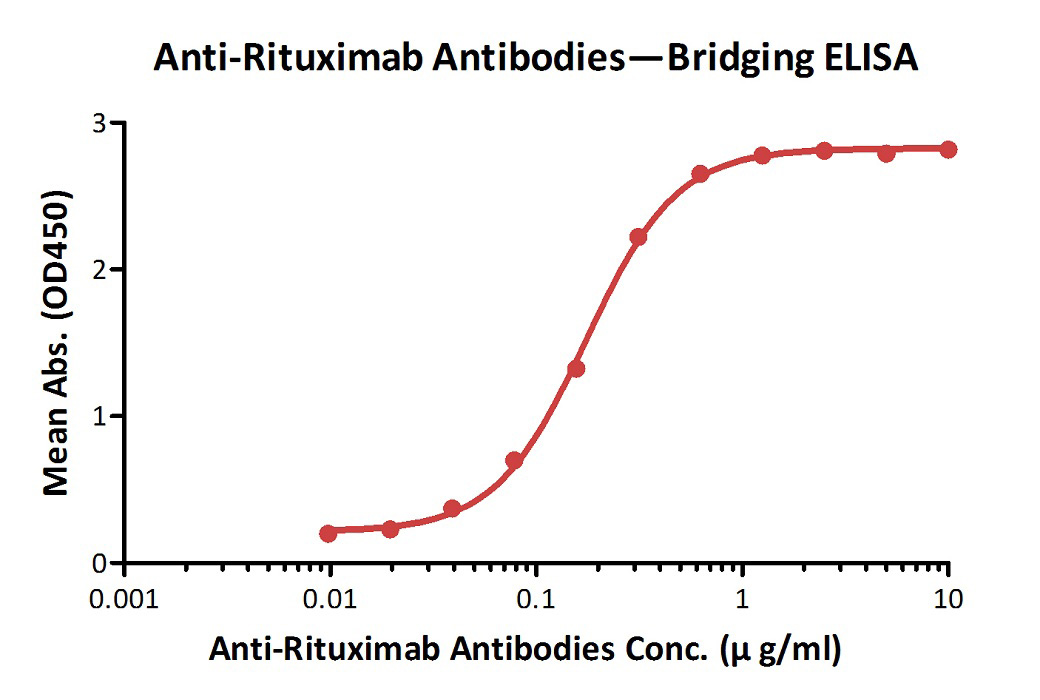 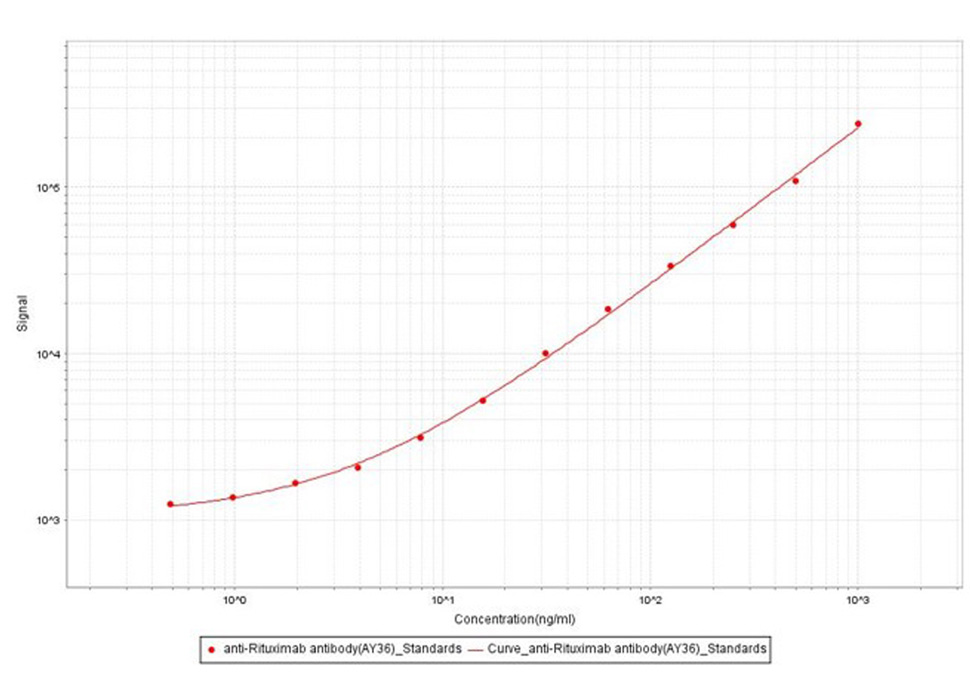 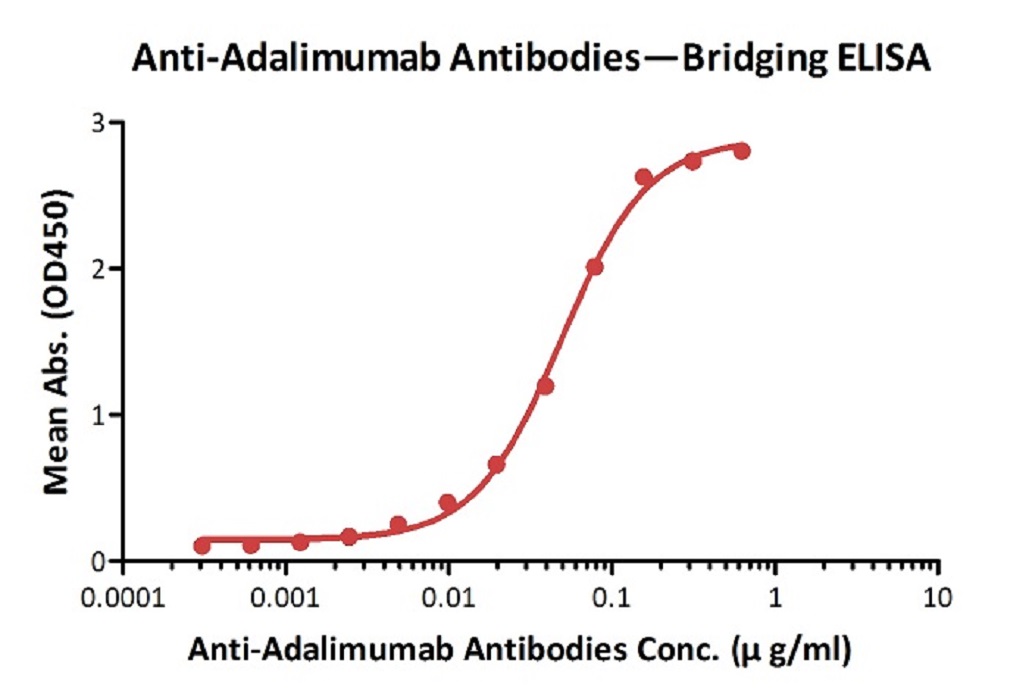 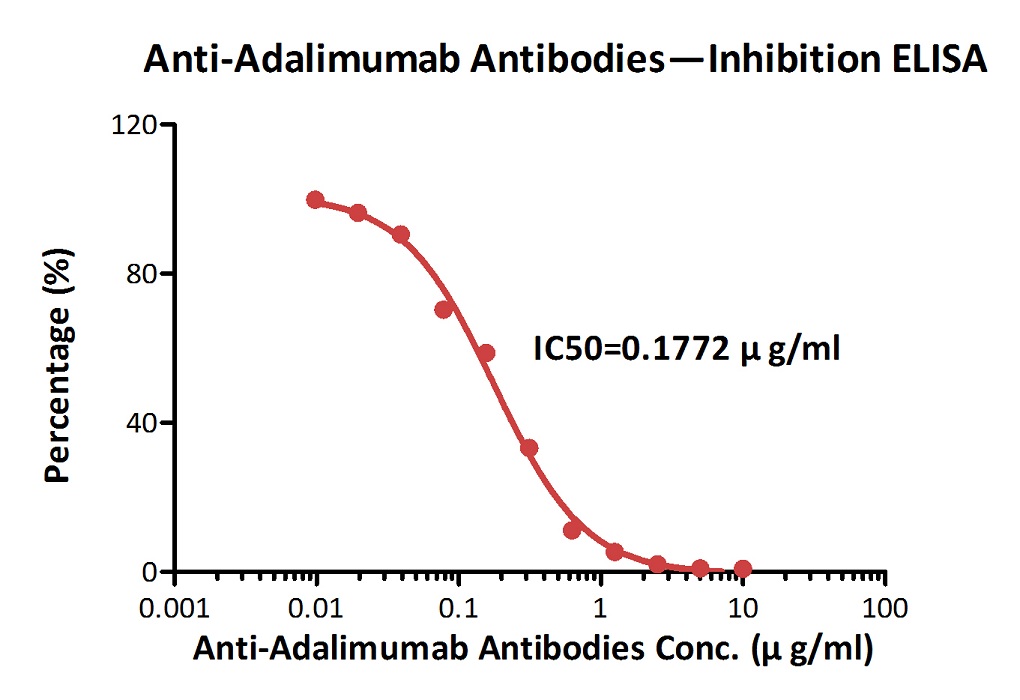 Measured by its neutralizing ability in a functional ELISA. Immobilized adalim*mab at 0.5 μg/mL (100 μL/well) can bind pre-mixed Anti-Adalim*mab Antibodies (Cat. No. ADB-Y19) and Biotinylated Human TNF-alpha (Cat. No. TNA-H82E3) with an inhibition rate of 100%.

ELISA is the most commonly used technology for quantitative analysis of therapeutic antibody in matrix. This is often done by indirect ELISA, competitive ELISA, sandwich ELISA or bridging ELISA. Among them, bridging ELISA is considered to be the best option, because of its low non-specific background and high sensitivity. We can see from the data, the use of goat anti-human IgG as secondary antibody results in high background due to unspecific binding, and therefore require pre-dilution before analyses. On the other hand, the bridging ELISA by anti-idiotypic antibodies uses HRP-conjugated Streptavidin for secondary detection, which minimizes the background interference. ACROBiosystems has developed a series of anti-idiotypic antibodies that are used for bridging ELISA. 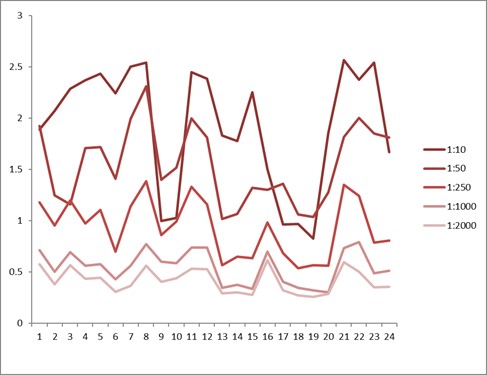 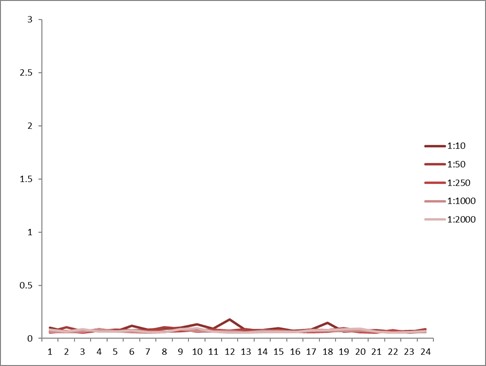 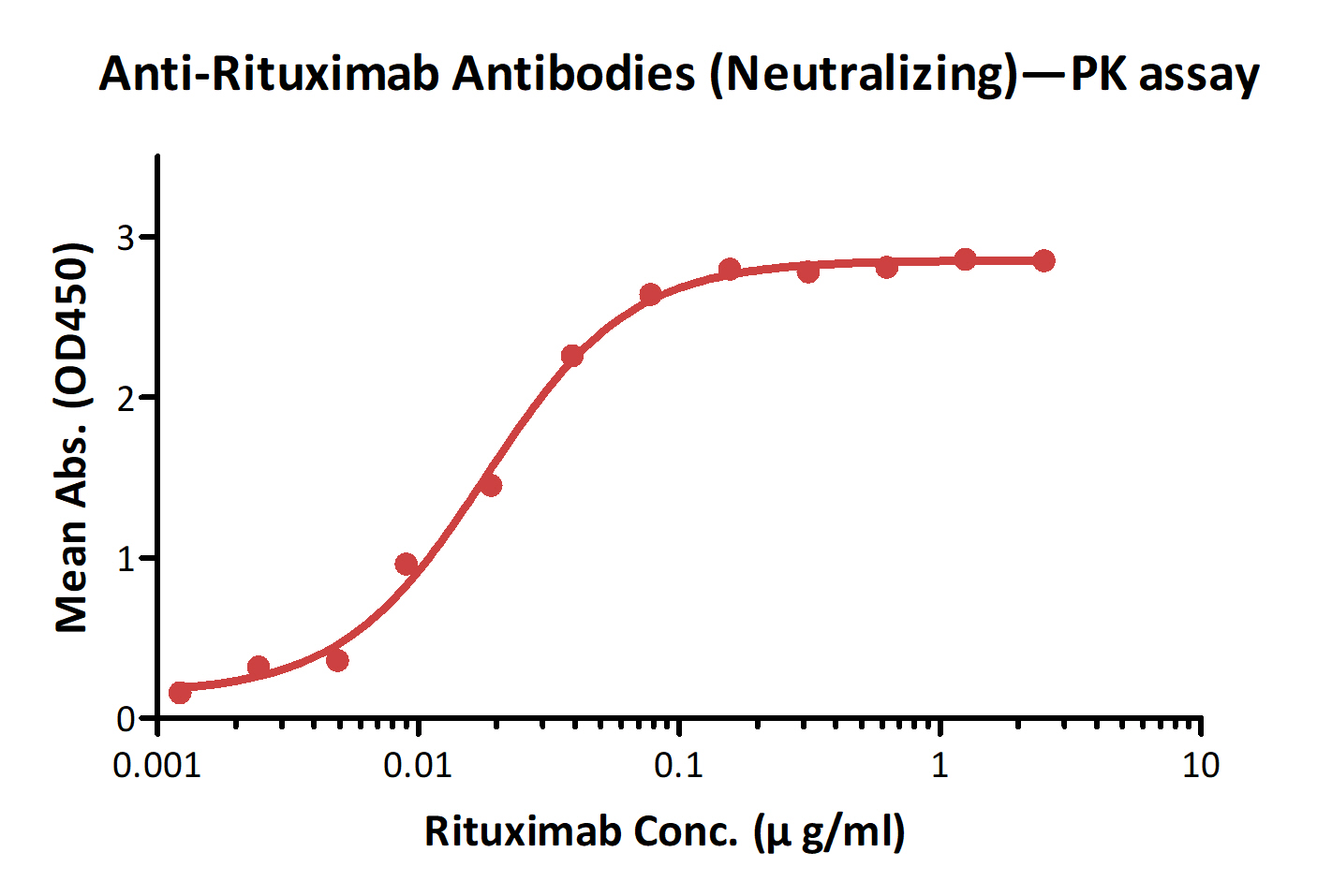 Contact Us
Features
High Affinity
Affinity measures the strength of interaction between an antigen and an antibody, which can be described as KD. The smaller KD represents the stronger affinity. We measured the affinity of all the anti-idiotype antibodies using the SPR method. This piece of data helps to predict the sensitivity in assay development.

High Specificity
We ensured the specificity of each anti-idiotype antibody product before it goes on the market. 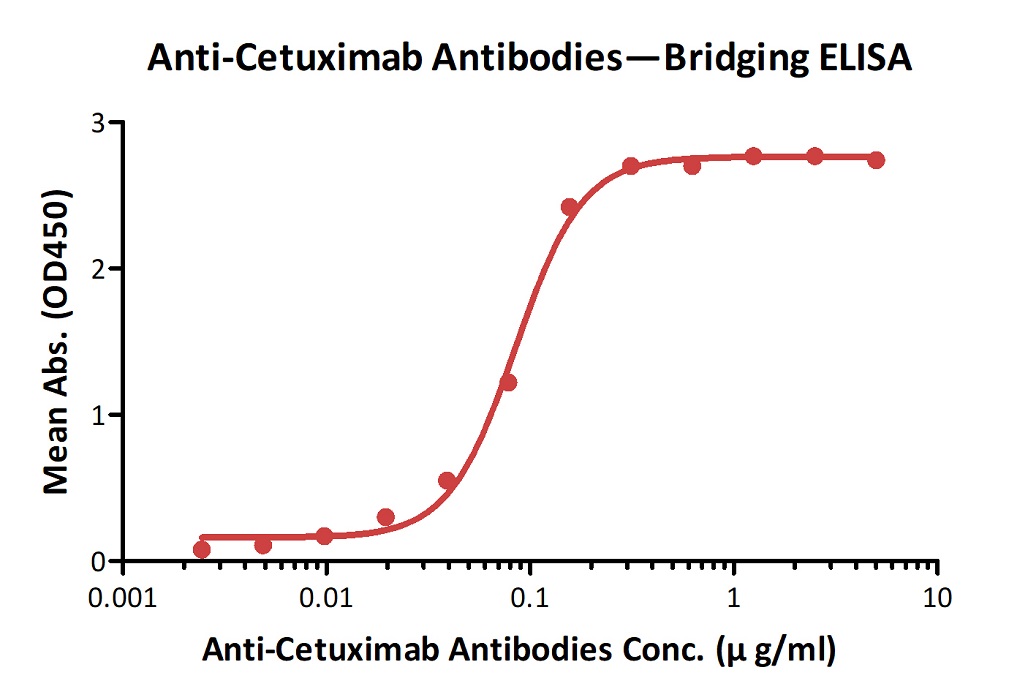 Contact Us
High Stability
ACROBiosystems performed accelerated stability tests and freeze-thaw tests to ensure the stabilities of our products before they go on the market. 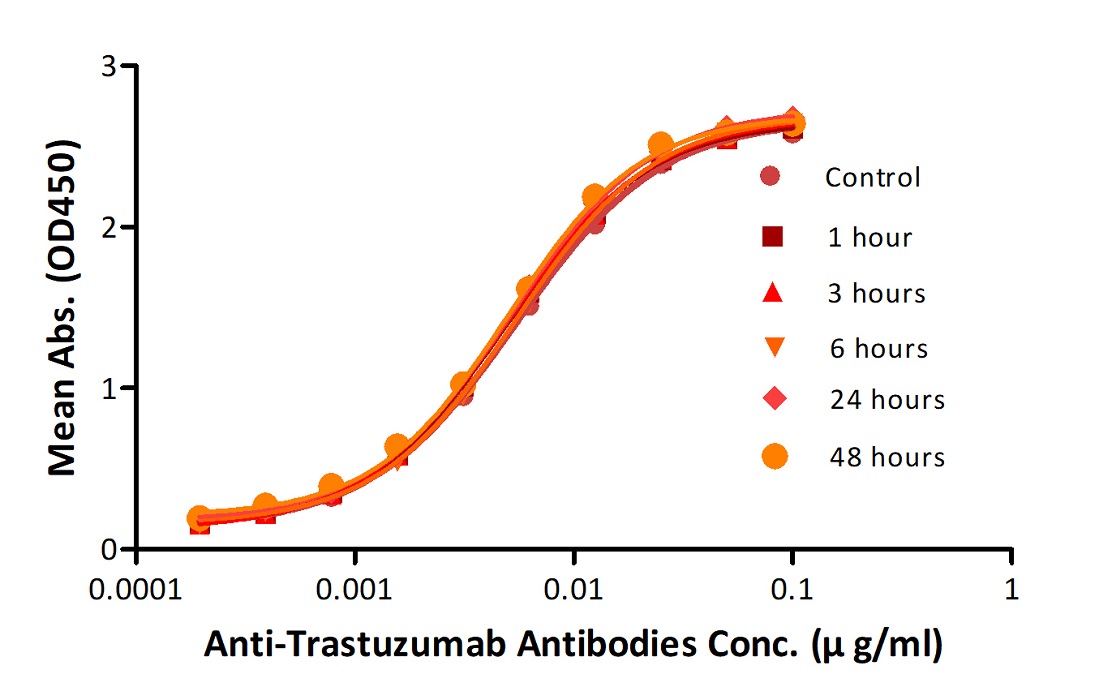 Reconstituted Anti-Trastuz*mab Antibodies were diluted to 0.4 mg/ml, aliquoted and placed at 37°C. Aliquots were removed from 37°C at every time point and placed at 4°C along with the control. No significant loss of activity was observed. 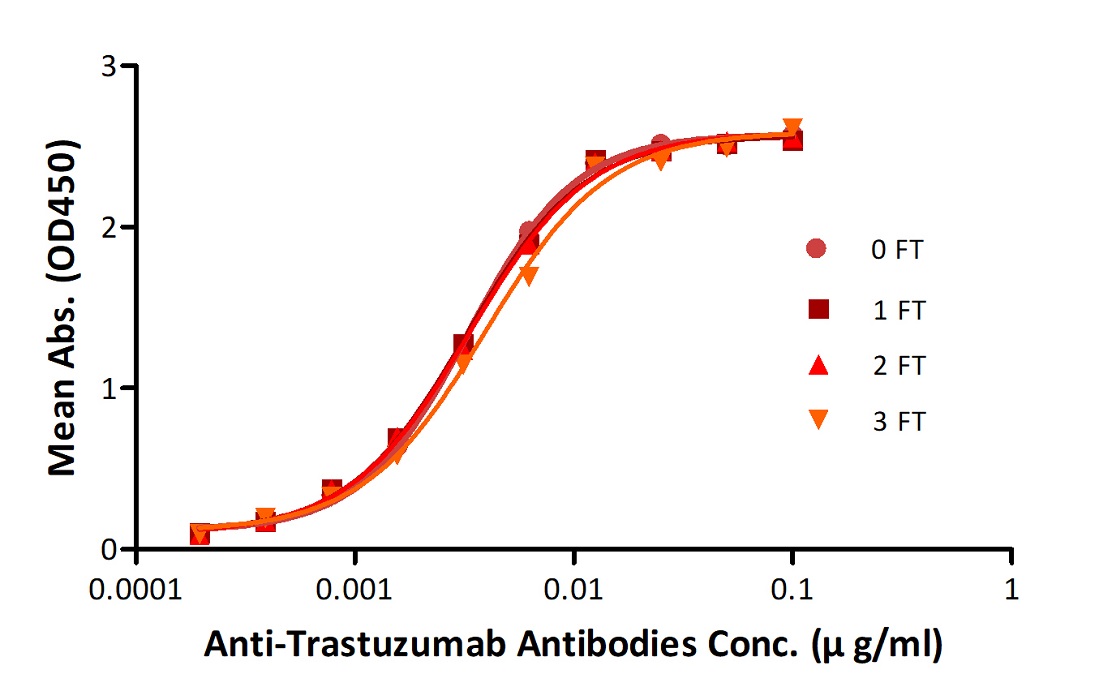 Anti-Trastuz*mab Antibodies were subjected to the indicated number of freeze-thaw cycles (FT). No significant loss of activity was observed.