ACROBiosystems offers a comprehensive collection of recombinant Fc receptor proteins, including their common variants, to help expedite your mAb development.

To meet the high purity requirement of pharmaceutical applications, our production team perform both SDS-PAGE and HPLC analyses to the Fc receptors for QC purposes. It’s noteworthy that it’s essential to use monomeric Fc receptor, which represents its natural state. The formation of oligomers during production may result in artificially enhanced binding interaction due to avidity effect. To avoid such situation, we have established strict internal control standards of monomer purity by HPLC testing. Only those batches meeting all purity requirements are released. 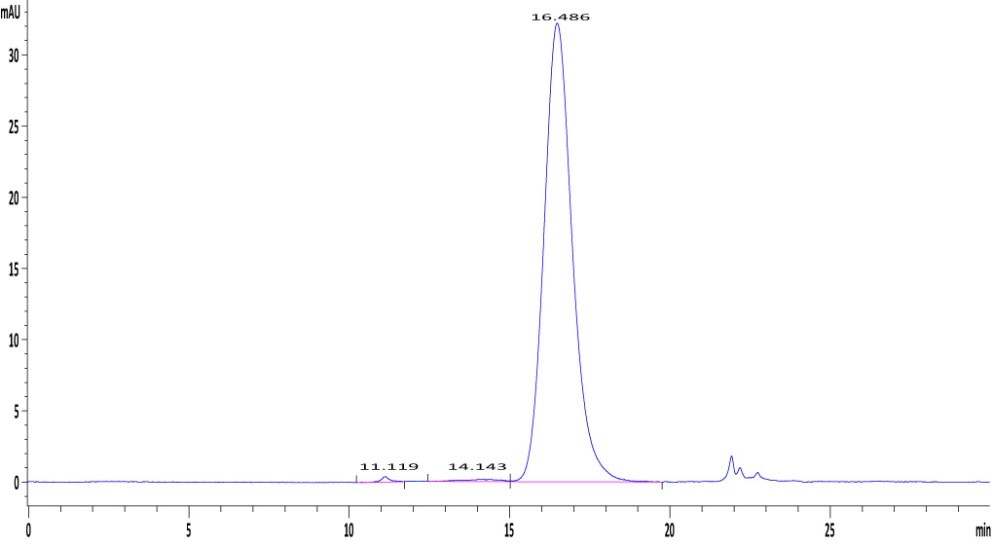 The binding affinity between two molecules can be determined by many methods. However, the studies of Fc interaction are often done by SPR, because traditional ELISA is not appropriate for low affinity receptors such as CD16 and CD32. To assure our Fc receptors deliver expected performance, our QC team use Biacore platform to test our products against reference antibodies. All SPR protocols are available for free.

We routinely apply rigorous quality control measures to ensure consistent performance of our product. As shown below, the batch variation among the tested samples is negligible.

We have compared the performance of different batches of CD32b (CDB-H5228) in the same assay, and the software analysis showed that the similarity score was very high, meaning high batch-to-batch consistency.

The use of biotin labeling can make your assay development much easier. We offer a variety of ready-to-use biotinylated Fc receptors. These proteins are produced using our in-house developed labeling techniques, which confers high bioactivity and minimal batch-to-batch variation. In addition, we have developed a series of Fc receptors of other species, which are suitable for the screening of non-humanized antibodies or the species cross reaction.

Fig. 7 Immobilized Cynomolgus / Rhesus macaque FcRn Protein (Cat. No. FCM-C5284) on CM5 Chip via anti-His antibody, can bind HERC**TIN with an affinity constant of 0.403 μM as determined in a SPR assay (Biacore T200).