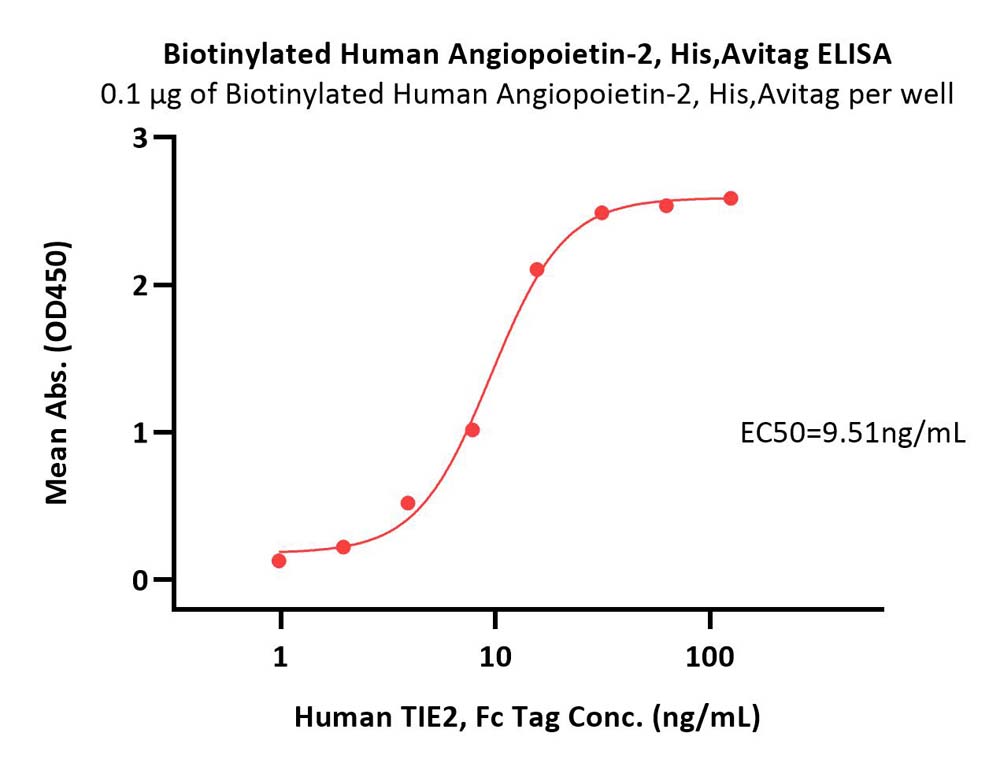 Angiopoietin-2 is also known as ANGPT2, AGPT2, ANG2, and is a secreted glycoprotein that plays a complex role in angiogenesis and inflammation. Ang2 is widely expressed during development, but it is restricted postnatally to highly angiogenic tissues such as the placenta, ovaries, and uterus. It is particularly abundant in vascular endothelial cells (EC) where it is stored in intracellular Weibel Palade bodies. Both Ang2 and the related Angiopoietin1 (Ang1) are ligands for the receptor tyrosine kinase Tie 2. Ang2 functions as a proangiogenic factor, although it can also induce EC death and vessel regression. Upon its release from quiescent EC, it regulates vascular remodeling by promoting EC survival, proliferation, and migration and destabilizing the interaction between EC and perivascular cells. Ang2 is required for postnatal vascular remodeling, and it cooperates with Ang1 during lymphatic vessel development. It mediates the upregulation of ICAM1 and VCAM1 on EC, which facilitates the adhesion of leukocytes during inflammation. Ang2 competitively inhibit Ang1-induced endothelial cell responses mediated by Tie2, and reduces vascular integrity. But the role of Ang2 is controversial since the opposite outcomes has been reported in other studies. Over-expression of Ang2 disrupts the vascular remodeling, induce endothelial cell apoptosis, and may play an important regulating role in tumor angiogenesis. Ang2 also promotes the neuronal differentiation and migration of subventricular zone progenitor cells.