As winter is fast approaching in the Northern Hemisphere, the confirmed cases and deaths of COVID-19 are rising rapidly. People are looking forward to the release of the COVID-19 vaccine, which will most likely end this pandemic. Currently, there are several vaccine clinical trials moving rapidly worldwide. However, the drug maker Pfizer announced on Monday that early data shows their vaccine is more than 90% effective, cementing the lead in a frenzied global vaccine development race. Pfizer plans to ask the Food and Drug Administration (FDA) for emergency use authorization (EUA) of the two-dose vaccine later this month. If everything goes well, by the end of the year, their vaccine will be ready for the public.

The spike protein of the virus is critical for targeting, host entry and membrane fusion, which makes it one of the important targets for therapeutics and vaccine development. Therefore, most of the COVID-19 vaccines are using spike protein as the antigen to generate the immune response. As you can see from the table below (Fig. 1), AstraZeneca, CanSinoBIO, CureVac, and Gamaieya are using wildtype Spike protein for their vaccines while Moderna, Pfizer, Johnson & Johnson, and Novavax are using a mutant spike protein (S-2P), which replaces 2 proline amino acids in S2 subunit of the wildtype. This structural change will stabilize the spike trimer and make more spike protein staying in the prefusion state. These spike proteins in the prefusion state is proved to generate a stronger immune response.

In the preclinical/clinical immunogenicity evaluation, neutralizing antibody titer reflects the immune response generated by the vaccines. According to the published data, CanSinoBIO used the wildtype spike protein for titer measurement and Moderna as well as AstraZeneca used S-2P. Interestingly, AstraZeneca used the wildtype spike protein for their vaccine but S-2P for titer measurement.

According to a most recent research, additional 4 proline mutations on the S2 subunit (S-6P) can further stabilize the trimer structure and make most of the proteins in the prefusion state. In other words, S-6P shows superior bioactivities over S-2P. 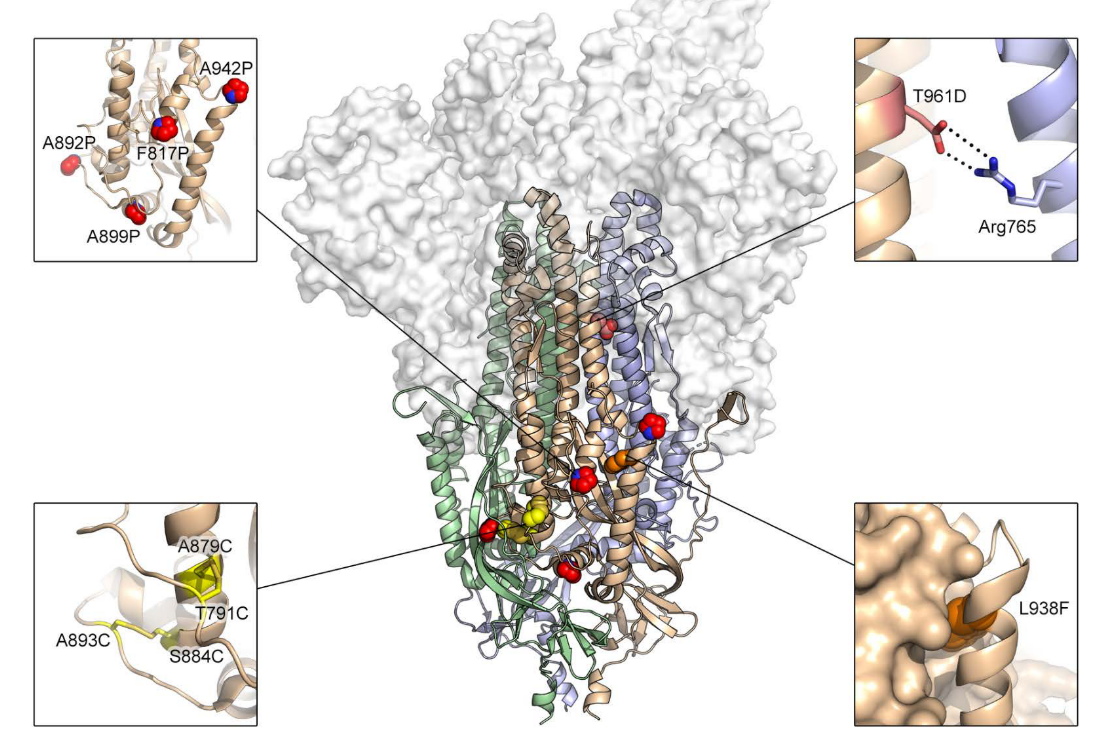 Scientists did a comparison study between S-2P and S-6P, measuring the titer in COVID-19 recovered patient serum samples. According to the data below (Fig. 3), S-2P and S-6P showed similar performance.

ACROBiosystems developed a series of S-6P products based on the publication. They compared in-house developed S-6P, S-2P, wildtype spike proteins as well as a spike trimer from competitor through titer measurement using recovered patient serum samples. As shown from the result (Fig. 4), their performances are similar to each other. 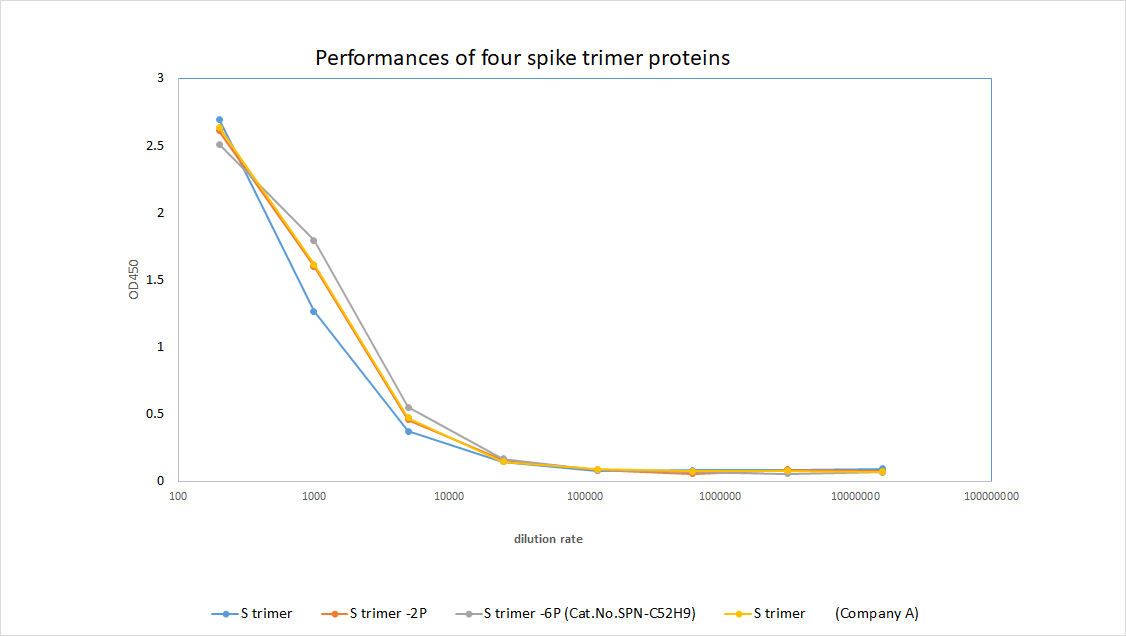 When measuring the antibody titer, a higher signal-to-noise ratio is favorable for accuracy and early detection. They compared the signal-to-noise ratios of the same four different spike trimer proteins using ten different patient samples. S-6P turned out to be the best among them (Fig. 5). In summary, ACRO S-6P is the best for the vaccine clinical immunogenicity evaluation. 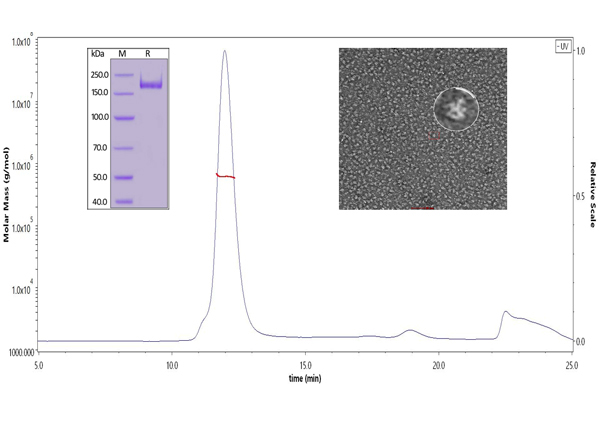 Fig 6. The purity of SARS-CoV-2 S protein, His Tag, Super stable trimer (Cat. No. SPN-C52H9) is more than 90% verified by SDS-PAGE under reducing (R) condition. The molecular weight was around 550-660 kDa confirmed by SEC-MALS. The particles are similar in size and appearance to SARS-CoV-2 trimers reported in published literature verified by negative stain electron micrography. 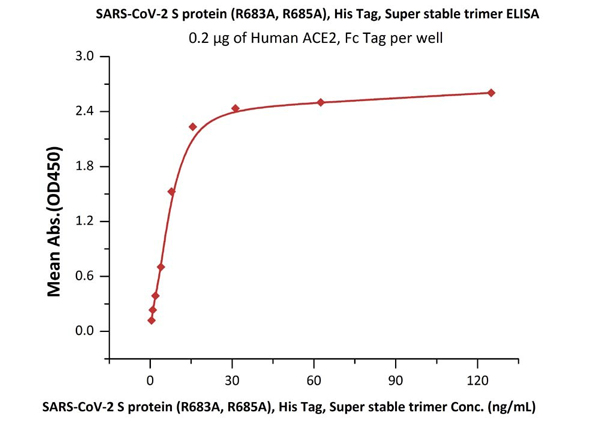 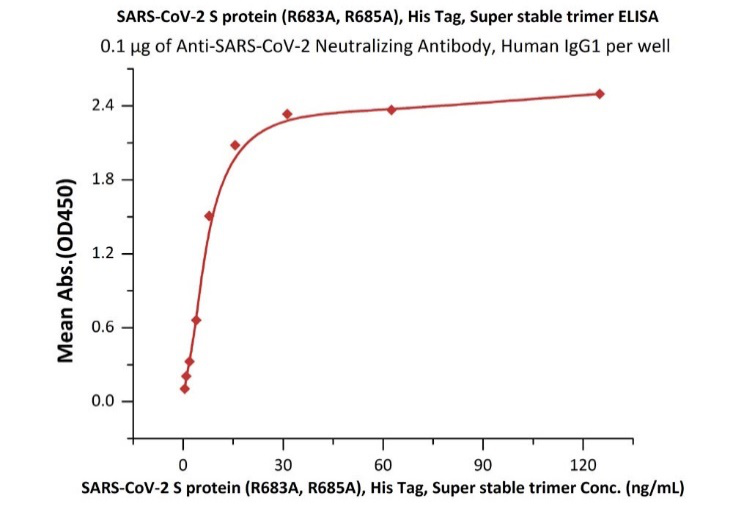