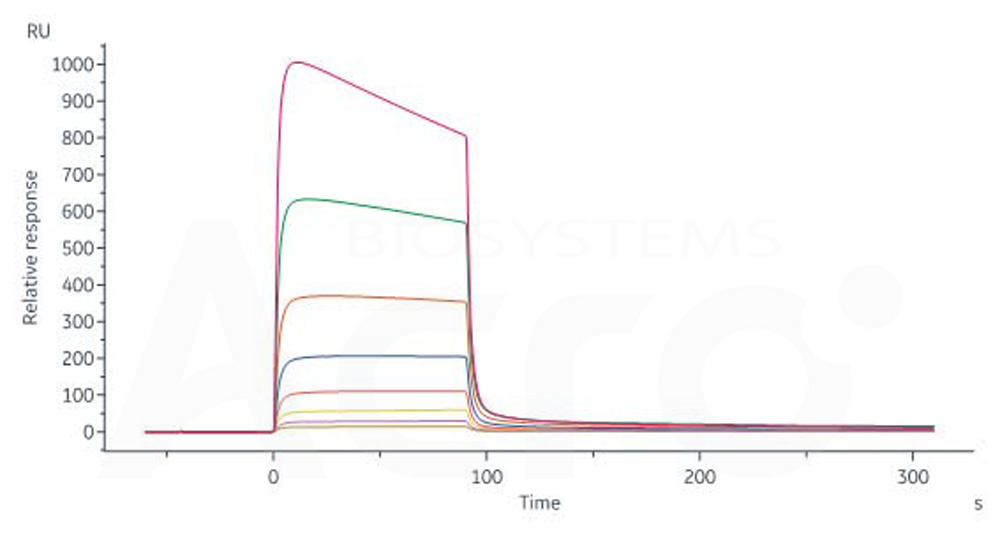 Rat CD32a, His Tag (Cat. No. CDA-R52H5) captured on NTA-Series S sensor chip can bind Rituximab with an affinity constant of 15.1 μM as determined in a SPR assay (Biacore 8K) (QC tested).

Rhesus macaque CD32a, His Tag (Cat. No. CDA-R52H4) captured on CM5 Chip via anti-His antibody can bind Rituximab with an affinity constant of 3.89 μM as determined in SPR assay (Biacore T200) (QC tested).

Receptors for the Fc region of IgG (Fc γ R) are members of the Ig superfamily that function in the activation or inhibition of immune responses. Three classes of human Fc γ Rs: RI (CD64), RII (CD32), and RIII (CD16), which generate multiple isoforms, are recognized. There are three genes for human Fcγ RII /CD32 (A, B, and C) and one for mouse Fcγ RII B (CD32B). CD32 is a low affinity receptor for IgG. The activating isoform, CD32A, is expressed on monocytes, neutrophils, platelets and dendritic cells. CD32A is expressed on many immune cell types (macrophage, neutrophil, eosinophils, platelets, dendritic cells and Langerhan cells), where inhibitory ITIM­bearing receptors may also be coexpressed and co­engaged by specific ligands. CD32A delivers an activating signal upon ligand binding, and results in the initiation of inflammatory responses including cytolysis, phagocytosis, degranulation and cytokine production. The responses can be modulated by signals from the coexpressed inhibitory receptors such as CD32B, and the strength of the signal is dependent on the ratio of expression of the activating and inhibitory receptors.