Antibody-drug conjugates (ADCs), an emerging class of targeted therapies that witnessed substantial growth over the past few years, are gradually starting the revolution of clinical cancer therapy.

You will learn the following key information for ADC drug development after reading the text:

• Specificity and expression of target

• Affinity and internalization of antibody

• Mechanism and properties of payload 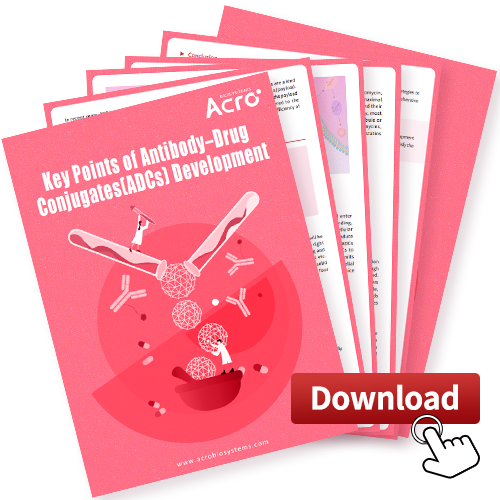 In recent years, ADCs  may serve as a novel therapeutic modality for many cancer patients. ADCs are a kind  of modified antibody drug that consists of three parts: monoclonal antibody  (mAb), linker, and cytotoxin/payload. The monoclonal antibody binds to specific  antigens on the surface of target tumor cells and brings the payload for  desired effect. Compared with traditional chemical and biological drugs, the payload  delivered to the tumor directly is much potent and reduced off-target  toxicities. However, many factors can affect the efficiency of ADCs including specific  target, suitable antibody and payload, stable and efficient linkers.

The target/antigen  is the starting point in developing ADCs and determines which tumor indication  will be targeted by ADCs and potentially impacts the choice of the conjugated  drug payload. Choosing the right target is critical for ADCs development. The  target will be related to drug recognized, special binding and drug’s effect.  Widely used target are cluster of differentiations such as CD22, CD30, CD79B, CD123 etc. These targets are prevalent in hematological malignancies like leukemia  and lymphoma. For solid tumors, targets such as Her2 / Nectin-4 / TROP-2 / PSMA are being researched currently. There are four key points when selecting the suitable  ADCs format.

The high  specificity of antibody is the basic requirement for the efficacy of ADCs. The  payload will enter the tumor relying on these high-affinity specific antibodies.  In addition to avoiding non-specific binding, the payloads are usually conjugated  to the Fc fragment or constant region of the mAb to enable cellular  internalization. Majority  of ADCs are based on IgG1 antibodies containing Fc fragment which will induce  immune functions such as ADCC, CDC, and ADCP. Another consideration affecting  cellular internalization is ADCs antibody size which limits the internalization  rate. High affinity binding with FcRn can cause ADCs to return to the  extracellular circulation, thus increasing exposure to healthy tissues which  not only limits the release of intracellular payloads but may also cause  off-target toxicities. FcγR cross-reacts with endothelial cells and the immune  system, and may also cause off-target toxicity. There  are four points when choice the suitable proposal as follow:

Isotype  of the antibody

The first ADCs  utilized readily available conventional cytotoxins such as doxorubicin,  methotrexate, mitomycin, fluorouracil and vinca alkaloid. These  chemotherapeutic drugs have relatively low potency with half maximal inhibitory  concentration (IC50) values in the micromolar range. However, they lacked  selectivity and their accumulation in target cells was poor. As a result, early  ADCs had relatively low efficacy. Currently, most ADCs are constructed with two  main families of highly toxic compounds acting either on microtubule or the DNA  structure. The most commonly used DNA targeting payloads include calicheamicins,  duocarmycins, pyrrolobenzodiazepines (PBDs), SN-38 and DXd. Additionally, the  anti-tubulin agents include auristatins and maytansinoids etc.

Linkers play a key  role in ADCs design. Various factors such as linker chemistry, mode and the  site of conjugation play a critical role in the PK/PD profiles of ADCs. Linkers  must maintain stability of ADCs in the blood long enough to reach the cancer  cell but must then be readily cleaved when internalized so that the payload can  be released. Broadly speaking, linkers can be categorized into two groups:  cleavable or non-cleavable linkers. Cleavable  linkers depend on physiological conditions in the cell to cleave the linker and  can be further subdivided into acid labile, protease sensitive and glutathione  sensitive. Non-cleavable linkers on the other hand form non-reducible bonds  with the amino acid residues of the mAb and are therefore more stable in the  bloodstream, have longer half-lives and reduced oﬀ target toxicity.

The conjugation chemistry between  antibody and the payload can alter the PK and therapeutic index of ADCs. The  conventional drug conjugation usually occurs on the mAb backbone either via  alkylation or acylation of lysine sidechains. These drugs (i.e  gemtuzumab ozogamicin, trastuzumab emtansine)  conjugation strategies are random and can produce a heterogeneous mixture of  ADCs with a varying number of Drug Antibody Ratio (DAR). The DAR can range  anywhere from zero to eight payloads per antibody. Although high DAR can  produce more potent ADCs, it can also result in destabilization, aggregation,  increased off-target toxicity, and enhanced drug clearance from systemic  circulation. Hence, there is more attention in site-specific conjugation (SSC)  that can produce more homogenous ADCs. These strategies include insertion of  engineered cysteine residues, insertion of unnatural amino acids in the antibody  sequence or enzymatic conjugation through glycotransferases and transglutaminases.  These ADCs with site-specific conjugation are in different clinical phase.

ADCs are drugs with enormous potential for  the treatment of hematological malignancies and solid tumors. Strategies to  manage toxicities and improve efficacy warrant further exploration. The design of ADCs requires comprehensive  consideration of various factors to ensure their specificity, efficacy and  stability.