As a leading manufacturer of recombinant proteins and other critical reagents for support in developing target therapeutics, vaccines, and diagnostics, ACROBiosystems employs an application-oriented development strategy, with a particular focus on product design, quality control, and solution-based support.

What is Parkinson's disease？

According to the data from Frost & Sullivan, in China, the number of people over the age of 65 with PD continues to grow, reaching 2,831,000 in 2018. This number is projected to increase to 3,459,000 in 2023. The latest literature showed that the number of PD cases in the United States is expected to increase to more than 1 million by 2030. Therefore, there is a huge demand for a novel and effective treatment for PD patients worldwide.

Etiology and pathological hallmarks of PD

The etiology of PD is not fully understood; the risk of developing PD lies on the crosstalk between genetic risk factors and environmental factors. Key pathological hallmarks of PD are degeneration of dopaminergic neurons in the substantia nigra pars compacta (SNc) and abnormal aggregation of alpha-synuclein (SNCA), which is the major component of Lewy bodies.

Abnormal SNCA is associated with multiple neurological dysfunction and degeneration mechanisms, including inflammation, impaired mitochondrial function, altered protein degradation systems, and oxidative stress. Specifically, normal SNCA is in the form of unfolded monomers. In PD, SNCA undergoes incorrect post-translational modifications such as phosphorylation at the Ser129 site leading it to fold into dimers, trimers, and oligomers, although it is not clear which polymerization form directly induces the neurotoxicity. These polymers further aggregate into protofibrils and amyloid fibrils that accumulate within neurons, impairing neuronal function and finally leading to neuron death. This process causes inflammation, resulting in further tissue damage.

SNCA has emerged as a key target for developing new PD therapies in sporadic and familial PD. 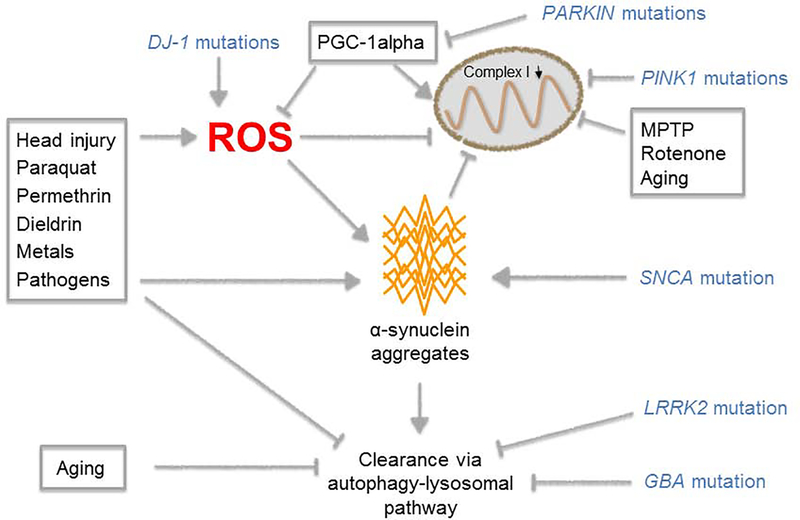 Multiple pathways that influence the onset of PD

Advances in the development of drugs targeting SNCA

In passive immunotherapy, several anti-SNCA antibody drugs are currently in Phase II, Phase I, and preclinical stages of clinical trials. The results of Phase I clinical trial of Cinpanemab/BIIB054 proved to be safe and tolerable, but the Phase II clinical trial was terminated due to safety issues that did not adequately meet the primary and secondary focus. Prasinezumab appears to lead to positive results, possibly due to the different binding sites of SNCA, with Cinpanemab binding to the N terminus, while Prasinezumab binds to the C terminus of the SNCA.

Existing research still does not meet the clinical needs of Parkinson's disease care. Compared to the motor symptoms, the underlying neuropharmacology of symptoms is minimally understood. In addition, the predictive value and optimal application of preclinical models have not been thoroughly studied, and new evaluable drugs are often lacking in clinical studies. It is hoped that scientific drilling and technological innovation will provide better symptomatic and disease-modifying treatment for PD patients.

ACROBiosystems has SNCA/Alpha-Synuclein protein（Met 1 - Ala 140）to support the research and development of PD therapeutic drugs. 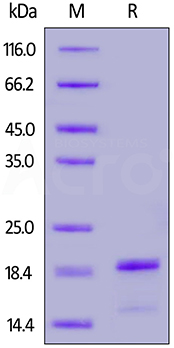 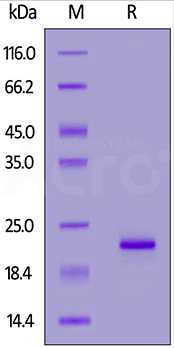 Other strategies for PD treatment

The leucine-rich repeat kinase 2 (LRRK2) gene is the most relevant genetic risk factor of PD that causes PD's most common monogenic forms. LRRK2 is a kinase that phosphorylates and regulates the activity of other proteins. The pathogenic mutations increase the enzymatic activity of LRRK2 kinase. LRRK2 regulatory targets include the RAB GTPase subgroup, whose functions regulate various cellular functions, including vesicular transport, cellular degradation pathways, immune and microglial cell responses. In preclinical PD models, small molecule LRRK2 kinase inhibitors can be neuroprotective, making LRRK2 one of the important targets for PD drug development.

The loss of dopaminergic neurons in the substantia nigra is the direct cause of motor symptoms in PD. The loss of these neurons leads to dysregulation of the basal neuromotor circuit, which affects motor integration, execution, and process control. When the substantia nigra function is impaired, it cannot produce normal reciprocal inhibition of the active and antagonistic muscles, which results in uncoordinated abnormalities in the active and antagonistic muscles and the development of Parkinson's symptoms. 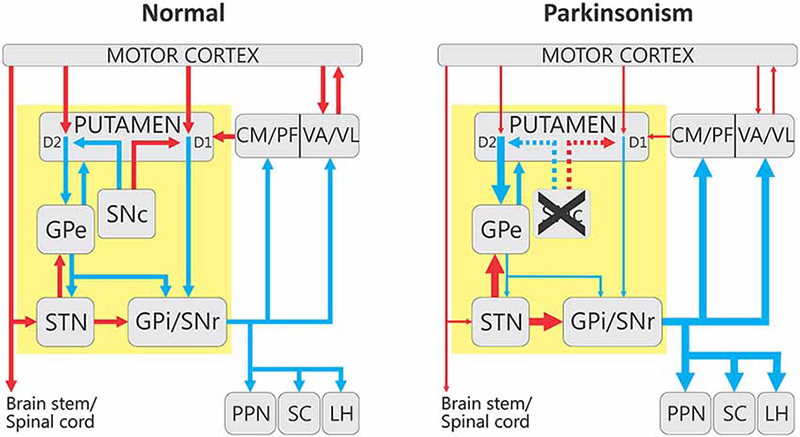 Changes in the basal ganglia-thalamocortical motor circuit in parkinsonism

Targeting a dopamine-related pathway is an important strategy in treating PD. Overall increased binding of dopamine to its receptors and the activity of the dopamine pathway can be effective in alleviating Parkinson's symptoms.

- In clinical practice, the most widely used drugs for PD treatment are levodopa drugs. These drugs can cross the blood-brain barrier and are converted to dopamine in the brain. In addition, dopamine receptor agonists, which mimic the function of dopamine and bind to the dopamine receptors DRD1, DRD2, and DRD3, can also be used for treatment.

- DOPA decarboxylase (DDC) catalyzes the decarboxylation of dopa to produce dopamine (i.e., hydroxytyramine). DDC inhibitors are usually co-administered with levodopa because although levodopa can cross the blood-brain barrier, only 1-5% of dopaminergic neurons reach the brain, and most of the levodopa is metabolized by peripheral DDC before reaching the brain. Therefore, DDC inhibitors that cannot cross the blood-brain barrier are often co-administered with levodopa to increase the amount of levodopa in the central nervous system.

- Monoamine oxidase B (MAO-B) plays an important role in breaking down neurotransmitters such as dopamine. The MAO inhibitor (MAOI) class of drugs aims to alleviate PD symptoms by blocking the action of MAO-B.

ACRO is developing more proteins for AD diagnosis and treatment. If you have any needs or more development suggestions, don't hesitate to get in touch with us.