Breast cancer is the most common type of cancer in women, and it currently represents a significant challenge to public health.

Breast cancer is a heterogeneous disease that can be classified into three major clinically relevant subtypes, which are managed differently: human epidermal growth factor receptor-2+ (HER-2+), luminal [expressing the estrogen receptor (ER), and progesterone receptor (PR)].

Triple-negative breast cancer (TNBC) is the most aggressive subtype of breast cancer, which is characterized by the absence of estrogen receptor (ER), progesterone receptor (PR) expression, and an absence of human epidermal growth factor receptor 2 (HER2) expression/amplification. Conventional chemotherapy is the mainstay of systemic treatment for TNBC. However, the lack of targeted molecular therapies and the poor prognosis of TNBC patients have prompted a great effort to discover effective targets for improving clinical outcomes. 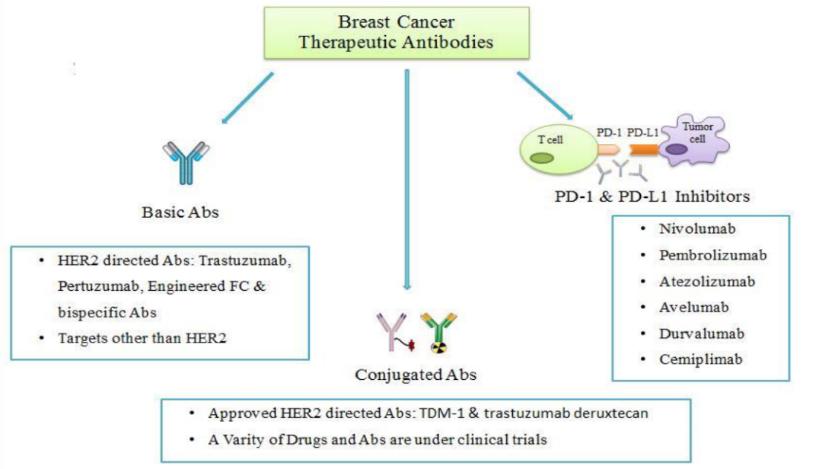 Monoclonal antibodies block the signaling pathways related to tumor cell growth by binding to HER2 or other antigens on the tumor surface, inhibiting tumor growth, or killing tumor cells through antibody-mediated ADCC and other effects. 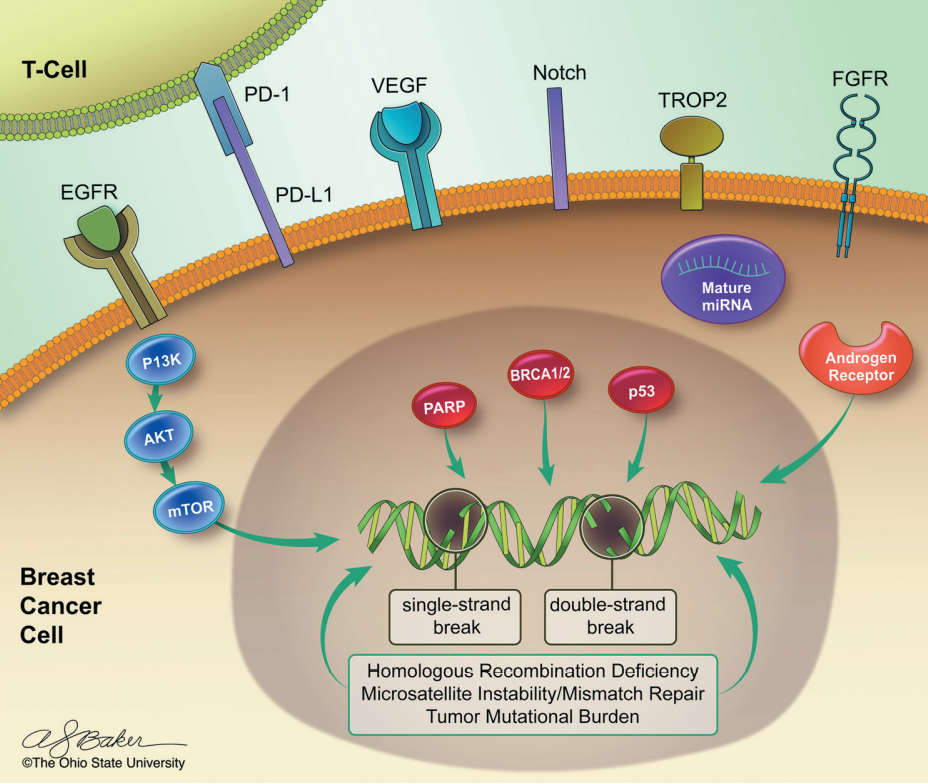 Epidermal growth factor receptor (EGFR) is a receptor tyrosine kinase that belongs to the ErbB family and is involved in angiogenesis, cell proliferation, metastasis, and inhibition of apoptosis. Studies have shown that EGFR protein is more frequently overexpressed in TNBC and is an independent prognostic indicator of disease-free survival (DFS) and overall survival (OS). The monoclonal antibody cetuximab combined with cisplatin chemotherapy has shown promising results in Phase Ⅱ studies, suggesting some subtypes of TNBC may be EGFR inhibition sensitive.

Vascular Endothelial Growth Factor (VEGF) is expressed by 30-60% in TNBC. It stimulates endothelial cell proliferation and migration, inhibits endothelial cell apoptosis, and promotes angiogenesis. One study found that TNBC patients had significantly elevated VEGF expression, and TNBC patients had shorter Disease-free survival (DFS) with non-TNBC patients. Angiogenesis is considered to be a key component driving tumor cell proliferation. Therefore, VEGF has also become a highly potential target for the treatment of TNBC. Results from a study of adjunctive bevacizumab (a monoclonal antibody targeting VEGF-A) in patients with TNBC suggest that bevacizumab may improve the efficacy of immunotherapy in patients with TNBC.

Diverse studies have demonstrated that aberrant activation of the FGF/FGFR axis may be involved in the progression of the different subtypes of breast cancer. Among breast cancer patients, several subgroups have been shown to harbor genetic aberrations in FGFRs, including amplification of FGFR1, FGFR2, and FGFR4 and mutations in FGFR2 and FGFR4. Although FGFR1 amplification is associated with a poorer prognosis in hormone receptor-positive BC, its role in TNBC remains controversial. FGFR2 expression was associated with poorer OS. FGFR inhibitors are one of the hottest small molecule drugs in recent years. If triple-negative breast cancer patients can also benefit from FGFR inhibitors, the survival rate of patients will be greatly improved. However, the resistance of breast cancer patients to FGFR inhibitor therapy is currently the biggest obstacle to clinical approval. There are also preclinical data investigating the efficacy of antibodies against FGFR isoforms and fibroblast growth factor ligand inhibitors, showing encouraging results in phase I clinical trials in solid tumors, including BC.

NOTCH signaling activates several genes related to cell differentiation, proliferation, and death. Four heterodimeric transmembrane Notch receptors (1-4) that react with the transmembrane ligands Delta-like (Dll) 1,2,4 and Jagged (JAG) 1 and 2 are identified in humans. Studies confirm that the Notch pathway has major participation in breast cancer progression through overexpression and abnormal genetic type expression of the notch receptors and ligands that determine angiogenesis. In breast cancer, functionally mutated NOTCH accounts for about 10% of TNBC. Studies have shown a correlation between NOTCH-1 and positive lymph node status and Jagged-1 and larger tumor status. Studies have also shown that increased expression of NOTCH-1, NOTCH-4, or Jagged-1 is associated with adverse prognostic factors such as decreased survival, so targeting the inhibition of the NOTCH signaling pathway may be beneficial for breast cancer treatment. Several inhibitors have been developed for this pathway development.

The Prolactin Receptor (PRLR) is a type 1 cytokine receptor expressed in a subset of breast cancers and may contribute to its pathogenesis. The Jak/Stat, PI3-kinase/AKT, and MAPK signaling pathways are activated when PRLR is combined with PRL, GH, or PL, resulting in tumor cell proliferation. PRLR is overexpressed in malignant breast epithelium relative to normal breast tissue and expressed across molecular subtypes of human breast cancers. The neutralizing antibody LFA-102 antagonizes PRLR signaling and proliferation in breast cancer cells and regresses PRL-dependent tumor xenografts. While LFA-102 was well tolerated as an unconjugated antibody in Phase 1 clinical trials in patients with metastatic breast and prostate cancer, efficacy was limited.

Despite the remarkable clinical efficacy of immune checkpoint blockade (ICB) in cancer treatment, ICB benefits for triple-negative breast cancer (TNBC) remain limited. The immunosuppressive tumor microenvironment of TNBC reduces the effective response of tumors to those drugs, so if new targets can be found to reprogram the tumor microenvironment, it will help improve the efficacy of immunotherapy in TNBC. A study published in cells showed that deletion of the E3 ubiquitin ligase Cop1 in cancer cells decreases secretion of macrophage-associated chemokines, reduces tumor macrophage infiltration, enhances anti-tumor immunity, and strengthens ICB response. Therefore, Cop1 is a target for improving cancer immunotherapy efficacy in TNBC.

The immune system usually plays an important role in the prevention of tumorigenesis. Immune escape through various mechanisms is a key process in the occurrence and development of malignant tumors. Immunotherapy has opened a new era of breast cancer treatment.

As well known, the PD-1 ligand PDL1 engages with T-cells resulting in upregulation of the receptor followed by an immunosuppressive signal, which inhibits kinases involved in the activation of the immune response. Pro-inflammatory cytokines and the overexpression of PDL1 inhibitory ligand may play a key role in developing cancer immune resistance mechanisms, resulting in a state of exhausted or tolerant immune T-cell response hence the importance of studying the possible role PDL1 expression as a resistance biomarker. Besides, high PD-1 and PD-L1expression, both negative regulators of the local immune response, is associated with better overall survival and higher pCR rate in TNBC. Several clinical trial data have approved the potential role of an immune checkpoint inhibitor in early-stage TNBC.

In 2019, the FDA approved Atezolizumab， a PD-L1 inhibitor, in combination with nab-paclitaxel (Abraxane) for the first-line therapy of metastatic TNBC, the first immunotherapeutic for breast cancer.

Antibody-drug conjugates (ADCs) are a relatively new class of highly potent molecules that combine the targeting properties of monoclonal antibodies with the cell destructive properties of cytotoxic agents to reduce systemic exposure and toxicity of the latter. ADCs enable a new era of breast cancer treatment. Several promising targets have been found in TNBC, such as TROP-2, GPNMB (Osteoactivin), LIV-1, Cadherin-6, etc.

On April 7, 2021, Gilead announced the FDA approval to sacituzumab govitecan (Trodelvy, Immunomedics Inc.) for unresectable locally advanced or metastatic triple-negative cancer patients breast cancer (mTNBC) who have received two or more prior systemic therapies, at least one of them for metastatic disease. Trodelvy is an antibody-drug conjugate (ADC) composed of a humanized RS7 antibody targeting Trop-2 linked with SN38 at a DAR of 7.6:1.

GPNMB is involved in cell migration, invasion, angiogenesis, or epithelial-mesenchymal transition, highly overexpressed in TNBC. GPNMB is a poor prognosis biomarker in BC.

LIV-1 is a multi-span transmembrane protein of the solute carrier family 39 with putative zinc transporter and metalloproteinase activity. As a downstream target of STAT3, it promotes the epithelial-to-mesenchymal transition that is important in the malignant progression to metastasis. LIV-1 is expressed in several cancers with the highest prevalence and expression level in breast, prostate, and melanoma. Additionally, LIV-1 has been linked with malignant progression to metastasis and associated with lymph node involvement in breast cancer.

Ladiratuzumab vedotin is an ADC composed of a humanized anti-LIV-1 monoclonal antibody conjugated to the microtubule-disrupting agent MMAE via a protease-cleavable linker with Seattle Genetics' proprietary technology. In a 1/2 phase clinical trial, the combination of Ladiratuzumab vedotin and Keytruda, a PD-1 inhibitor, achieved an objective response rate of 54% in patients with unresectable and metastatic TNBC.

CA-6 is an ideal ADC target selectively expressed in solid tumors. SAR566658 consists of DM4 and an antibody targeting CA6. In a phase, I clinical trial involving 114 patients, 60% of patients in the 190 mg/m2 and 90 mg/m2 dose groups experienced tumor regression on days one and eight. 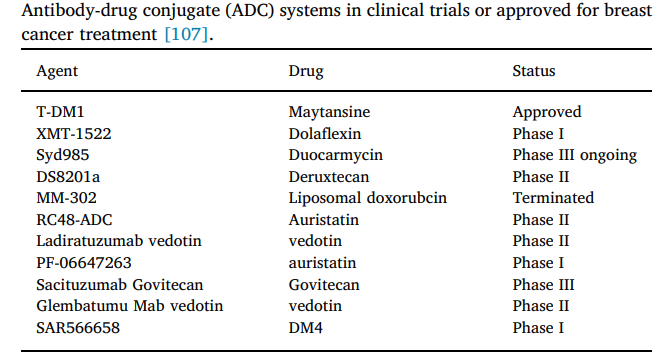 Strict quality control: purity is verified by SDS-PAGE/MALS and SPR/BLI/ELISA verifies the bioactivity.

Experimental protocol is available for free 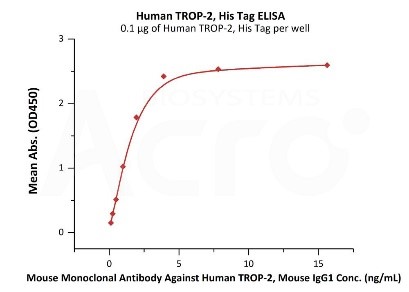 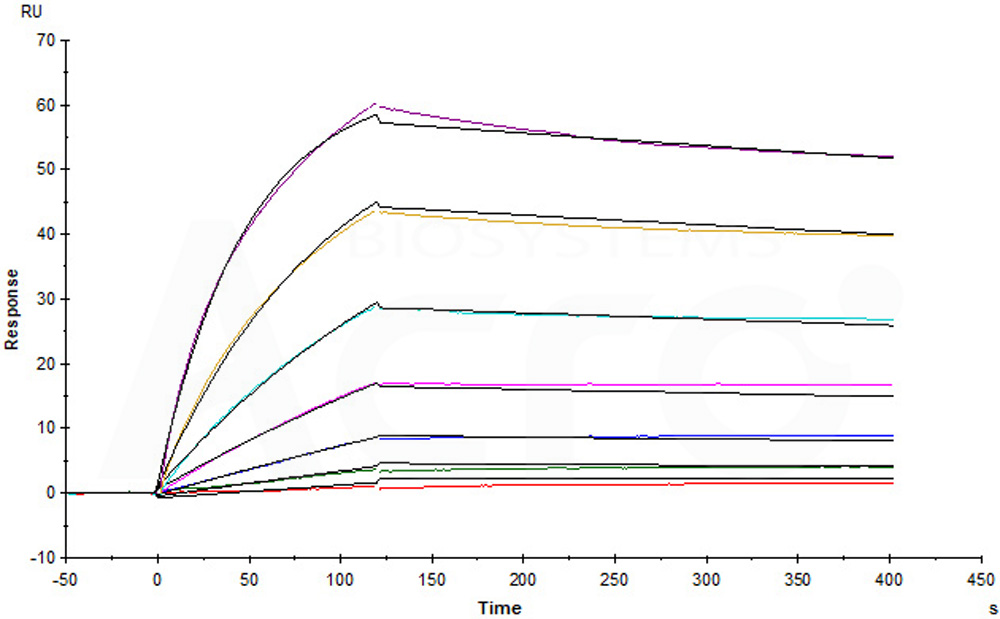 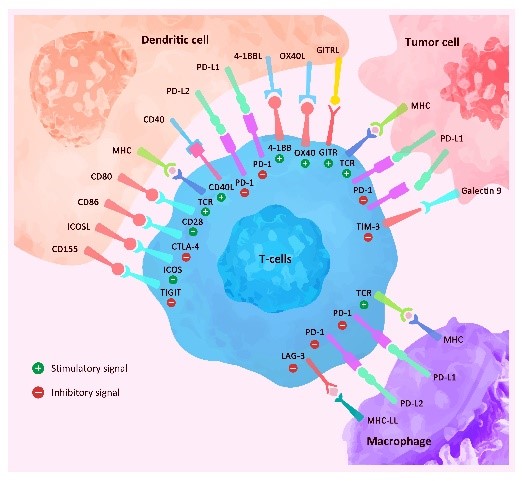 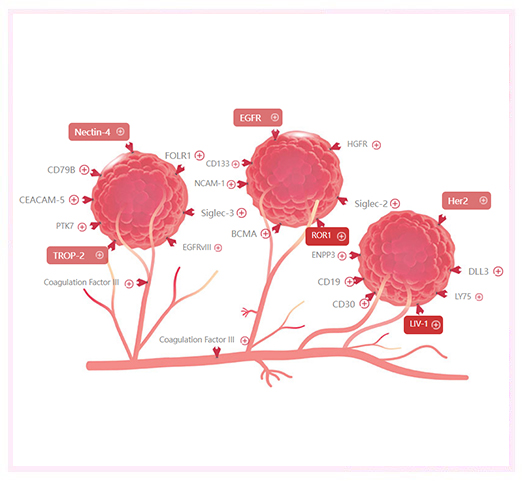